Let's turn to Isaiah 59:2.  You may remember this verse from all the way back in lesson 3, when we had the lesson on salvation.  According to this verse God has a problem.  He has been "separated" from His people.

- What is the agent of that separation?

The Bible is a big book, but it can be summarized by this very Bible verse.  God has been separated from His children and He is doing everything to get back to us.  God did not initiate this separation.  Rather, it is the sin that we possess in our very nature that is causing this separation.

Do you remember the story in Genesis 3?  What instructions were Adam and Eve given?  What did they do?  Let's turn to Genesis 3:7-10 and read the rest of the story...

- According to verse 8, what did Adam and Eve do when they sinned?

- From what you and I know about God, is it possible to hide from God?

- We know that Adam and Eve were perfect creatures in a perfect world with a perfect relationship with God.  Do you think they knew that you cannot hide from God?

- Do you think that Adam and Eve knew they could not hide from God behind a tree or a bush?

So, why did Adam and Eve hide?  If you think about it for a moment, it was when Adam and Eve disobeyed God that guilt, shame, and fear entered into the human race for the first time ever.  The first-ever marital dispute happened when they blamed each other for that act of disobedience.  Sin not only separates us from God, it also separates us from each other!

When humans experience guilt, shame, and fear, our instinctive reaction is to run and hide.  Sin causes us to feel guilt and also causes us to want to run away from God.  There is more to the issue in Genesis 3:7-10 than just merely eating fruit.  According to those verses, the apparent reason that there is sin in the world and thus horrible occurrences like war, famine, disease, rape, etc. is all because someone ate a fruit?  Does that even make sense?  Doesn't that seem a little extreme?

How does God feel about the separation between Him and His creatures?  Let's turn to Hebrews 1:9.

Imagine you were a parent and a stalker stole your child to keep as a sex slave in his attic.  As a parent, how would you feel about that stalker?  He was the agent of separation between you and the child you love.  In Eden, someone came into God's house and stole away His children and has kept us captive and enslaved for over 6000 years.

- According to verse 8, what is the purpose of the sanctuary?

This is the answer to the problem of shame, guilt, and fear.  This is how God is going to answer the problem of sin and horrible occurrences like war, famine, disease, rape, etc.

- What did Moses put in the ark?

If it is true that this is God's answer to separating the sinner who He loves, from sin, which is what He hates, how is this going to work?  Let's turn to Leviticus 1:-4

- According to verse 3, what kind of offering was the sinner to give?

- According to verse 4, what was the purpose of the offering?

Atonement is the reconciling of two parties that were at odds with each other and removing the separation from the two parties at odds.

There were rituals and services that were conducted in the sanctuary that revealed to the world how God was dealing with the sin problem.  If someone sinned they were to go and get a sheep without blemish and travel to the center of the camp and bring their offering to the gate by the sanctuary and give the animal to the priest.  The person would the kill the animal by slitting its throat and the priest would catch the blood.

Remember, in the Old Testament, animals like sheep were often considered pets.  If you lived in that time, you would be sacrificing an innocent creature that you loved and having to kill it to make it pay for something that you did.

Is God a blood-hungry tyrant Who likes to see suffering and death?  Is that what God is like?  What was His point?

The point is we do not understand how gruesome sin is.  We just don't get it.  The way God helps us to understand is through the Sanctuary message.  The person making the sacrifice goes away with a picture of just how awful sin is.  God needs us to understand that sin is sick, gruesome, and dirty.  God is trying to get us to feel how He is feeling towards sin, to see His perspective.

- According to the Bible verse, what does blood symbolize?

- What is the only payment for sin?

Something has to bleed.

- How are our sins forgiven?

If you want to be forgiven, something has to bleed.

Separation from God leads to death (which in of itself represents separation).  Death is the opposite of life.  Life is in the blood.  God is showing us in advance through the sanctuary that the result of sin is death, so that we can do something about it.

If we think blood is horrid, God thinks it is worse than we do.

- If we commit sin, what are we also committing?

The law is thirsty for blood.  Why?  The law demands obedience and demands a payment for disobedience.  The payment is life, but life is in the blood.  The sinner owes the law payment, but the only currency the law will accept is blood.  The sinner therefore has to pay with blood.  The sinner can either use his own blood or find a substitute to bleed on his behalf, for the law to be appeased.  The sprinkling of the blood in front of the ark is saying that we have come to pay our debt and thus the law is satisfied.

According to verse 10, who is the sanctuary pointing to?

The sanctuary is a vague outline pointing towards Jesus and His role in separating sinners from their sin.  The New Testament is saying that the shadow is over because the real thing is here.  Jesus came and is better than the old representative.

- What does Peter compare Jesus to?

When the prophets saw Jesus, they saw a sacrificial lamb.  Do you remember where else we read about a lamb without blemish?

What does precious blood mean?  Blood represents life and life is in the blood, so therefore we have precious life.  Peter is seeing thousands of years of history fulfilled in one Man.  Jesus was a lamb and His life was without blemish.  Jesus lived a perfect, sinless life.

- What does the Lamb of God do?

If you accidentally broke your mother's vase, you would probably feel bad about it.  However, if you found out later that the vase you broke was a priceless antique vase, your guilt would increase greatly, because now you have a concept of the value of that vase.

The cross at Calvary was trying to get people to see the value of the Sacrifice and the price of forgiveness.

The sinner at the gate would have to think twice when faced with sinning because of the memory that sinner would have from killing an innocent lamb the last time.

God was stripped naked hanging on a tree - the Creator was murdered by the creatures of His creation.

Is the Sanctuary message relevant today?

Some people may claim the Sanctuary message is not relevant and that we do not need to bother with the Old Testament anymore because now we have Jesus and the New Testament.  However, it would behoove you to know that Jesus was also in the Old Testament! 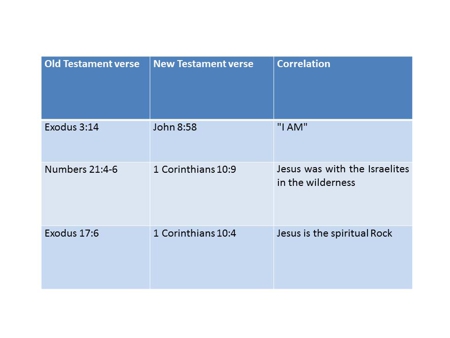 Jesus was leading His people all along.  Most stories of Jesus are in the New Testament, but Jesus was there all along!  The God of the Old Testament is Jesus Himself and is depicted in shadow and revealed through the sanctuary.  The people in the Old Testament were saved in the same way we are today...by faith.  We are looking back and having faith in Jesus' sacrifice.  They were looking forward and having faith in Jesus' sacrifice to come.

Why do we keep sinning?

If a boy puts his hands on a stove and starts screaming because it is hot, you would think that he would immediately take his hand away from the stove, right?  The thing is, we keep on sinning because we are not convinced enough that it is burning us.  We don't look at the cross often enough to see what sin did to the Son of God.

- According to verse 21, what is Jesus doing for us?

Are there things in your life that you regret?  Jesus wants to free us and He wants to give us the benefits and credits for His life and become what we were in our place.  Christ was treated how we deserve so that we can be treated the way He deserves.

Let's turn to Hebrews 6:6 to close out this lesson.

- What happens when Christians fall away and then repent again?

Wait a minute, Jesus died already.  What does this mean?  Jesus is the only lamb available for us, so He feels that same pain that He had at Calvary every time we sin.  This is not an abstract, but a very real statement.  There is pain in the heart of God when sins are committed.

What is it that hurts God?

You and I are both there at the cross and we are bringing pain to the heart of God.  He is saying to us, "Please, put an end to My pain."

I will see you again next time for the next lesson!