Purpose: To reveal the absolutely compelling evidence that Jesus Christ is the fulfillment of the coming Messiah.

Theme: Jesus of Nazareth is the promised Messiah.

Hello!  Today we are going to go over one of the most amazing time prophecies in the Bible.  This prophecy points to a monumental event that affects all of humanity!  How do we know that Jesus is the Messiah?  This prophecy will reveal the exciting answer!  Are you ready to find out more?

- According to this verse, how long until the sanctuary will be cleansed?

- According to this verse, what does one day equal to in prophecy?

- According to these verses, what does the 2300 days prophecy refer to?

Daniel is astonished by this vision, but he does not yet understand it at this point at the end of Daniel 8.

- According to these verses, who is sent to explain the vision of the 2300 days to Daniel?

It is important to understand that Daniel 8 and Daniel 9 are connected.  This is the only way the unfolding of the 2300-day prophecy can happen.  Gabriel comes again in Daniel 9 to bring an explanation of the vision.

- According to verse 24, how many weeks are given to Israel to make an end to transgressions?

- According to verse 25, when is the starting point of this time period for Israel?

The word "determined" in Daniel 9:24 comes from the Hebrew word "chatak," which means to cut off or amputate.  You must amputate FROM something.  If a segment of time is amputated, what is it amputated from?  The answer is a bigger time prophecy.

In verse 24, Israel is given 70 weeks to get their act together.  In verse 25, we are to start counting from the going forth of the command to restore and build Jerusalem.  The decree was given in 457 BC by Artaxerxes I Longimanos, the king of Persia.  That is when they were supposed to start their clocks, because in 69 prophetic weeks (483 literal years), the Messiah would come.

How do we know that 457 BC is the actual starting point?  That date is derived from Ezra 7:1-9.  According to these verses, King Artaxerxes gave the decree to rebuild Jerusalem in the 7th year of his reign.  We know from history that Artaxerxes began his reign in the fall of 464 BC.  These verses also tell us that Ezra left Babylon in the first month and arrived in Jerusalem in the 5th month.

One thing to note the calendar in ancient times is not quite like our calendar today, where we go from January to January.  The Jewish civil calender went from autumn to autumn (months 7-12 then months 1-6) and the Jewish holy calendar went from spring to spring (months 1-12). 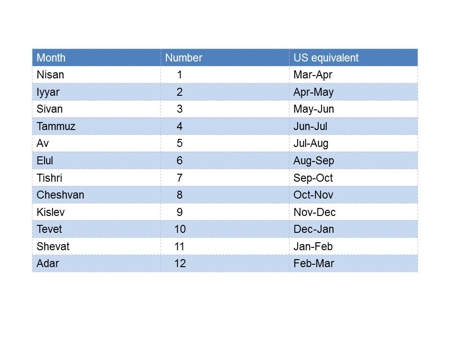 Another thing to note is that in ancient times, the reigns of kings were counted differently than we normally would.  The year the king first came into power is considered the accession year of his reign.  In a sense, the accession year could be considered "year 0."  The king's first full year of reign would be a chronological year from the start of the civil new year. 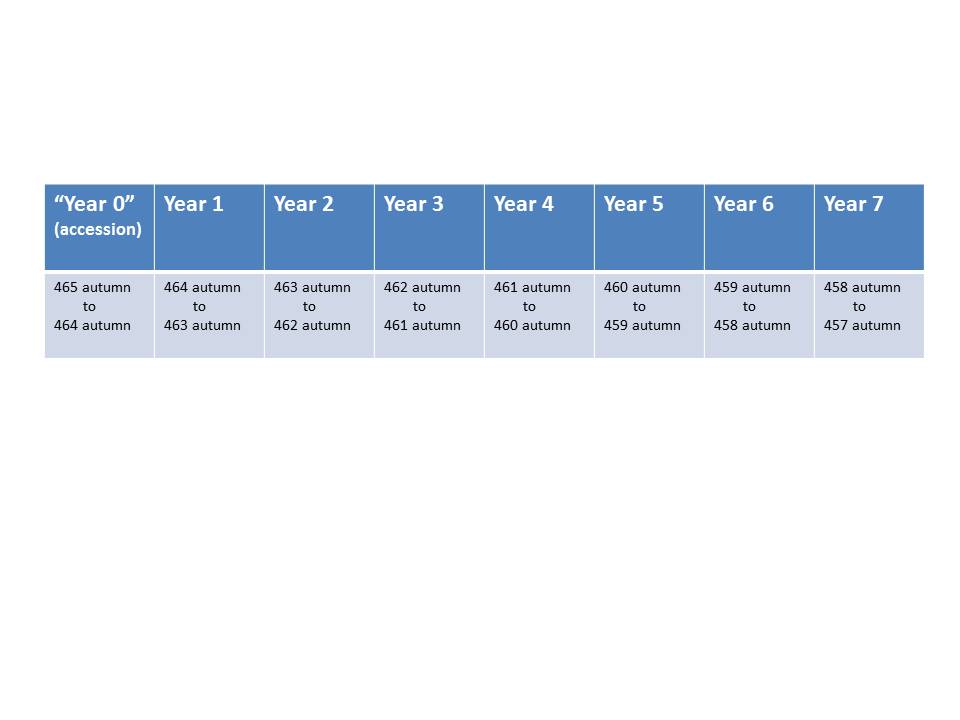 If you read the entire book of Ezra, you might be asking yourself, weren't there three different decrees to rebuild Jerusalem?  This is true.As you can see from the chart, the 7th year of the reign of Artaxerxes would fall on autumn 458 BC/spring 457 BC.  The decree was given in spring 457 BC, as Ezra departed Babylon in March/April of 457 BC (the first month) and arrived in Jerusalem in July/August of 457 BC (the fifth month). 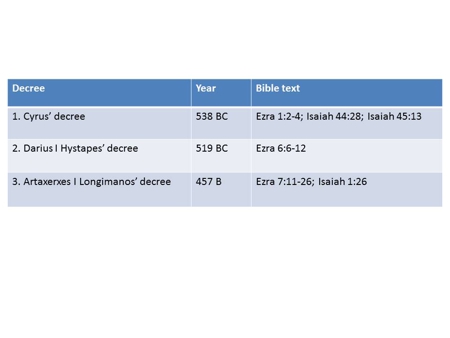 However, the reason Artaxerxes decree is the starting point is that unlike the first two decrees, it gave Jerusalem legal rebirth and allowed for the establishment of a local government.

Hopefully, you now have enough Biblical proof and confidence that 457 BC is the starting point for the 70 weeks prophecy.  We know from Daniel 9:25, that the Messiah will come in 483 years after the decree to rebuild Jerusalem.  Starting from 457 BC, 483 years takes us to AD 27.  (Note that there is no year 0, as the time goes from 1 BC to AD 1).

- According to this verse, Who anointed Jesus?

- According to these verses, where did this anointing take place?

- According to this verse, what was Jesus anointed to do?

- According to these verses, what was the first thing Jesus preached about?

Isn't it weird for someone to all of a sudden preach that the time is filled?  Let's think about it for a moment.  What time is fulfilled?  Were these strange random words, or is there some significance to what Jesus said?

This happened exactly on AD 27.  The time of the 69 weeks was fulfilled.  God's timeline is on time!

- According to this verse, how old was Jesus when He began His ministry?

We know from history that Jesus was actually born on 4 BC.  If you counted 30 years from 4 BC, you would get to AD 27!  Astounding!

If you read Luke 3:1-3, you will see that God gives a lot of historical reference points, so that we can see exactly when Jesus was baptized in verse 21.  For example, the Roman historian Suetonius recorded that Tiberius was given authority equal to August Caesar in AD 12 in a declaration of "co-princeps" and began to reign jointly with August.  (Tiberius had sole reign in AD 14 after the death of Augustus.) 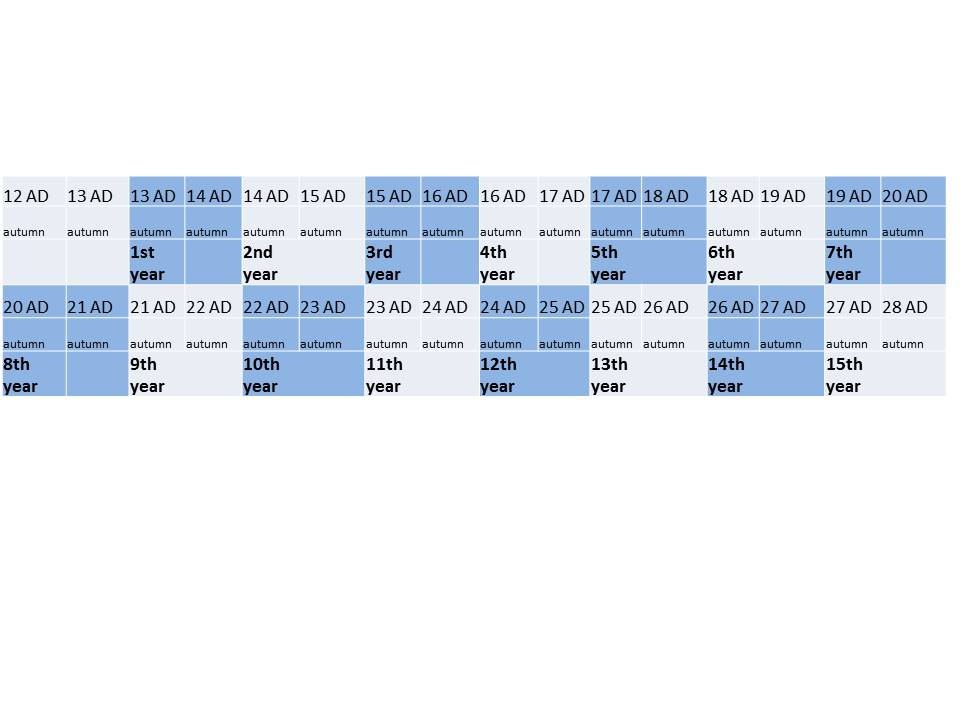 We aren't finished with this prophecy, though.  This prophecy doesn't just predict the beginning of Jesus' ministry, but also the end of it.

- According to these verses, what will the Messiah do in one week?

- According to these verses, when will the Messiah bring an end to sacrifice and offering?

- What is half a week in prophetic time when converted to literal years?

- According to this verse, what is Jesus doing?

Jesus made this statement in Matthew 26:28 shortly before the cross.  In Daniel 9:26-27, Daniel wrote that the Messiah would confirm a covenant in the middle of the last seven years of the prophecy.  Compare these verses.  Can you see the prophetic significance in Jesus' words in Matthew 26:28?

Where do we want to go if want to make sacrifices and offerings?  We would go to the sanctuary.  These verses are saying that Jesus is going to put an end to the rituals of the sanctuary.

- According to this verse, what happened to the veil separating the Most Holy Place from the Holy Place in the sanctuary?

The veil was torn - this curtain was a thick embroidered fabric that was ripped from top to bottom.  Note, not from bottom to top as a man would do it, but supernaturally from top to bottom.  This is God saying that these services are over now just as Jesus, "the real lamb" (John 1:29), was breathing His last breath.

In only 3 & 1/2 years, look at what Jesus achieved and how He influenced the whole world!

- According to these verse, what does Jesus tell His disciples as He sends them out?

Was Jesus racist?  Why did He say this?  Jesus is saying this because He is watching the clock.  He knows that the Jew have only a few years left.  Jesus is saying to His disciples to put everything they have in the direction of the children of Israel because in a few years they are going to be cut off forever from being God's chosen people.

- According to these verses, who is Jesus warning?

Jesus warned them, but they would not listen.  Finally, the day came and God honored their decision.  The Gospel went to the Gentiles.

According to the prophecy in Daniel 9, the end of the 70 weeks would take us to the year AD 34.  Was there any significant event that happened that year?

- According to these verses, what did the Jews do?

Stephen was the first Christian martyr and this event signified the end of the Jews as God's chosen people.

On this second journey, Paul visited Corinth before Jerusalem.  Acts 18:12-18 states that Paul stood before the proconsul Gallio in Corinth.  We know from history that Gallio only served as governor of Corinth for one year, as there was an inscription found in Corinth about Gallio's governorship dated AD 51.  If you subtract 17 years from AD 51, you get AD 34!  Isn't Bible prophecy amazing?

- According to these verses, who rejected the Gospel message?

Paul is saying here: "We have tried, but you have judged yourselves unworthy."  Israel was no longer the chosen people of God and the doors were flung wide open to the Gentiles and the rest of the world.  This is the conclusion to the prophecy.

- According to these verses, what statement did Jesus make?

- According to this verse, why could the Jews not lay hands on Jesus?

"My time has not yet come."  Throughout His life, Jesus repeated this statement until the end when He said that "it is finished."  Jesus was on heaven's schedule and nobody could touch Him until God was ready.  All the power of darkness could do nothing to alter the fulfillment of God's Word.  The Word of God is so powerful, even the laws of nature had to obey.  When God says something, you can take it to the bank.  When He speaks, He means it and you can place all your trust, life, and eternity on His words knowing that it will come to pass.

Friends may have failed you.  Family and people you love may have broken promises to you.  Sometimes the people we love the most are the ones who hurt us the most.  However, one thing we know fore sure is that the Word of God will never fail you.  It is reliable and trustworthy - you can always stand upon it with confidence.

The 70-weeks prophecy talks to me about God's amazing longsuffering, forgiveness, patience, and love for us.  Jesus loved His people so much that He gave them nearly 500 years to make a decision about Him.  Daniel was in captivity at the time he was given the prophecy because of Israel's unfaithfulness.  If you read Matthew 18:21-22, you will see that Jesus chose that reference because of Daniel.  This is how long Jesus was forgiving Israel for the 70-weeks prophecy!

God will keep His Word to the end.  He will never pull out and is always waiting with open arms.  There is nothing that you can have done that can keep you from the love of God.  He is waiting with open arms for you to make a decision for Him today.  If you follow through with this, you are going to be okay because God has promised it.  What will you decide today?