The church began with only three Vietnamese families. Far away from their home land, these three families gathered together every Sabbath to study God's Word. First they worshiped in homes, and later some of their friends, relatives, and other church members joined the group. Their numbers increased and soon a larger, more convenient meeting place was needed. Sponsorship and evangelistic program for the "boat people" who came to the Glendale, California area also added new members to God's church. As a result of this development, the Glendale Vietnamese Seventh-day Adventist Church was officially organized under the Southern California Conference on February 25, 1984.

Even though the church was officially organized, the members were not financially able to purchase a church facility. The real estate market in Southern California at that time was exceptionally high and out of reach for the refugee people. The church members continued to rent a room to meet every Sabbath for many years. God had seen the need of the Glendale Vietnamese Church, just as He had designed a program for His work. God was opening a way and preparing a permanent place where His people could serve Him better.

One of the people who never lost faith that the Glendale Church would some day have a church building of its own, was Mrs. Giao Cong Le. For many years, regardless of the ups and downs of the church, Mrs. Giao believed God would answer the prayers of His children. She always urged and continually searched for a church facility.

In the Fall of 1994, the real estate market in Los Angeles had sunk to its lowest level. At that time, an amount previously pledged to purchase a church building for the Vietnamese Church would have to be withdrawn for another project, if the Vietnamese could not use it immediately. During the same period, a church large enough to fit the needs of the Vietnamese group was up for sale in El Monte, California. The opportunity came at the right time. The Glendale Church Board unanimously decided to use all the church savings towards the purchase of the El Monte property, and asked Pastor Giao Cong Le to be the chairman of the fund-raising project for the new church building.

The Lord continued to bless and work miraculously for the Vietnamese Church. The benefactors, church members, and friends responded to the fund-raising project and gave willingly and generously. The Southern California Conference also was eager to help purchase the El Monte property. In December of 1994, the transfer of ownership papers were signed, and the Glendale Vietnamese Church took ownership with the remaining debt of approximately $130,000 to be paid by the end of the year 2001.

In 1995, Pastor Giao Cong Le officially retired and the Southern California Conference appointed Pastor Vinh Khac Nguyen to lead the Lord's work for the Vietnamese Church. Although paying off the debt within a few years was a real challenge for the church members, the Vietnamese Church had made great progress in different ministries. Previously, various church projects were hindered due to lack of a church facility. Now, the church building has made it possible for the Lord's work to develop much easier.

During the past four years, the church has organized health fairs and health seminars for the surrounding Vietnamese community. Because of the church facility, prayers meetings are able to be held weekly. The facility also makes it possible for evangelistic and revival meetings, youth activities and many other events to be organized. El Monte is an area where many Vietnamese refugees settle and is an excellent location to proclaim the Lord's message.

Look back at the last 25 years, the Vietnamese Church has progressed faithfully. The church is alive and growing because of the church members' dedication to Gods by meeting together and keeping His Word, faithfully returning tithes, and offering their time and money to maintain the church facility. The church building that you are sitting in today is the result of the contributions from all the church members, friends, and from the Southern California Conference. But above all, this church building is provided by our Heavenly Father who hears and answers the prayers of His children, and find a place where they can worship Him. 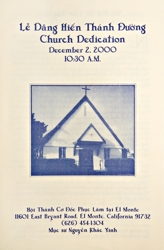